As the years go by anniversaries serve to review and take stock of what we have experienced, the decisions taken and the resolutions for the future. They are an opportunity to highlight the achievements made so far and set new goals. This is Cementos Lemona’s commitment in our centennial.

The date of the constitution, 1917, is already significant. In that same year, companies as important as Babcok and Wilcox or General Eléctrica Española were founded, but few, as Cementos Lemona, created as Sociedad Anónima Cementos Portland de Lemona, have managed to survive the passing of the years and circumstances, now allowing us to blow out the candles of the centenary.

Reaching 100 years is no easy task, and we can even say that Cementos Lemona is a rara avis because we have been able to adapt to the environment and the circumstances, reinventing ourselves at every moment, conserving our personality and identity. This is particularly complicated taking into account our location, in the heart of the Vizcaya municipality of Lemoa, with around 3,500 inhabitants. Neither the size nor the location have been an impediment for the name of Cementos Lemona being mentioned among the leading companies in the sector. Perhaps conversely, it has served as an incentive to always be at the forefront.

A firm commitment to the environment has enabled us to be one step ahead and anticipate European regulations, which has made us worthy of numerous awards at state and European level. 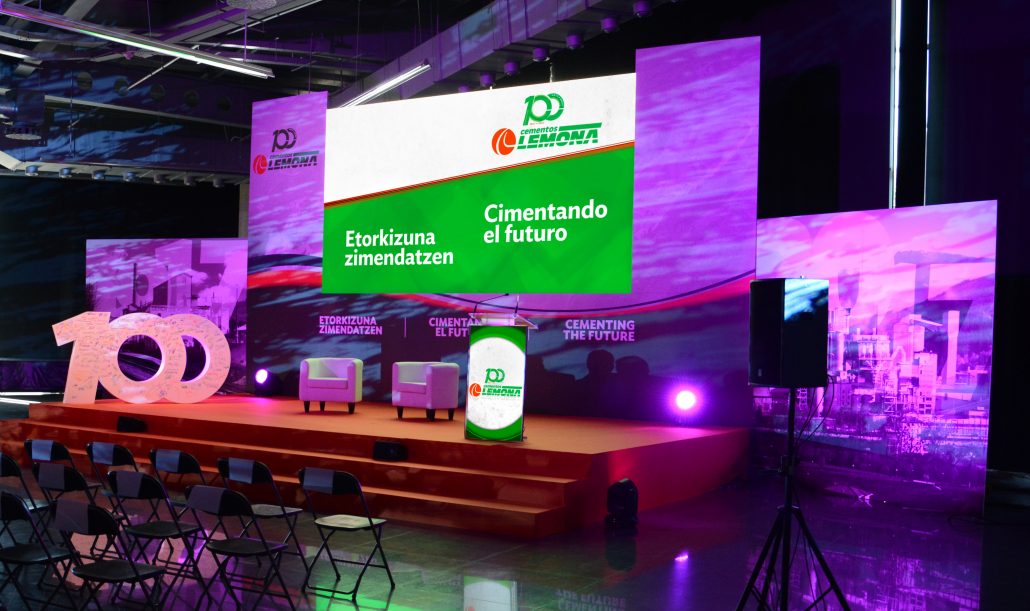 Innovation has always been part of our character, and this led us in 1964 to triple production with a dry oven, the second installed in Spain. Years later we would install the first gravel bed filter in the State, the first roller press and, in 1997 and 2001, the first facilities for recovery of unused tyres and bone meal, respectively.

An exporting spirit has permeated each of our steps. Such as, for example, extending our business to the USA, which occurred in 1989. This way, with the start of the Coastal silos in Boston, we started to participate with Dragon, a cement factory and the concrete plants in Maine.

The 1990s helped to extend the scope of action toward the prefabricated concrete, aggregate and environmental activities enterprise sectors.

Throughout these 100 years of history there has also been time for uncertainty, intense reflection and debate. Sometimes, due to exogenous forces, such as the hostile takeover of INTRA in 1989, which was settled successfully, thanks to the vigorous action of the Board of Directors of the company of that time who managed to address the threat. In 2006, Cementos Portland Valderrivas, through a takeover bid, took the company over. This era coincided with a period of great difficulty in the markets that affected all sectors of the economy and that finished with a stoppage of production for several months.

After the arrival of CRH in 2013, there was a turning point. CRH has given us the support and security that allow us to face the future with decision and commitment toward new challenges.

2017 is a very special year, not only because of what it represents to reach 100 years, but also because, on balance, Cementos Lemona has the privilege to continue counting on a qualified professional team and, of course, the trust and loyalty of many customers and suppliers.

Cementos Lemona celebrates a century of life. Our commitment, our future.

Cementos Lemona: 100 years of history at the service of innovation and social...